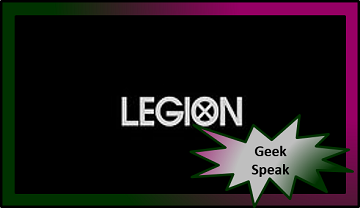 I may have mentioned this before but I love David’s journey. “Chapter 4” did a good job of continuing that path and just when it looked as if Legion would spend the rest of its first season in David’s head, he pops out in the real world and joins his friends’ road trip. This week’s Legion was trippy as an octogenarian’s balls.

“Chapter 4” did a better job of incorporating the rest of Legion’s cast. Syd, Ptonomy, and Kerry embark on a road trip to unearth what the monster in David’s head is hiding. Syd and Ptonomy are well-developed, this episode added a little more depth to their characters, but Kerry and the man who shares her body Cary were explored and the result was as weird as that last statement made it sound. There’s no shortage of odd powers on Legion. What else would you expect from The New Mutants, turned X-Force, which led to X-Statix that included a mutant named Doop, who’s a green, floating spheroid creature, resembling something one might drop in a toilet and rhymes with Doop? In this dark corner of the X-Men universe, nothing’s off-limits.

District 3 made more than a passing appearance. That’s a good development as well. Legion hasn’t delved into why they want David, beyond the fact that he’s powerful, but I’m not sure we need much more than that at this point. “Chapter 4’s” conclusion suggests that District 3 will get more concrete. I’m not a fan of nebulous government agencies. They’ve been done to death.

There was also a heavy dose of David as well. His powers run deeper than Melinda Bird first thought, so there may be no end to the number of personalities. And the Lenny—or is he/she Benny?—character is definitely one of the personalities inhabiting David’s mind and he/she is not benevolent. I liking how this is taking shape. Viewers get enough information so they’re not completely lost but there’s so much going on that it’s like stumbling around your house at night with the lights off.

But it’s not all rosy. Oliver Bird, Melinda Bird’s husband, was introduced at a convenient time. David slipped into the astral plane and that just happens to be where Oliver resides. I like Oliver, and his scotch swilling, jazz-loving, beat poet flamboyance, but his insertion into Legion’s storyline is manipulative. Still, I hope to see more of him. Man, he’s fun.

David could also become too powerful. I know. I know. He is that powerful in the comics, but Legion could explain away any plot device by giving Legion too many powers. The show hasn’t slipped too far into deus ex machina territory, but giving David too many powers is the writing equivalent of making a figure-eight on ice as thick as a Kleenex. Cracks could easily form and Legion could fall. David just warped across hundreds, if not thousands, of miles by traveling in his dream-like astral plane. What? This could get silly.

Then again, aren’t absurd powers the point of Legion? He’s ridiculously overpowered but he can’t trust himself. Legion has scratched the surface of this deep character. Despite any perceived or impending flaws, it’s one of the most, if not the most, evocative series on TV. Keep shining a light on one of Marvel’s darker corners.

Legion continues to amaze me and this week is no exception. “Chapter 4” gave more screen time to the side characters while maintaining its central focus on David Haller. This week’s Legion was as intriguing as it was riveting.

The appearance of Oliver Bird made the story a little lighter with his fun-loving, easygoing attitude. At the beginning of “Chapter 4” he tells two stories, one about a cute rabbit who gets into a conflict but gets a happy-ending and one about a boy who is told not to jump into the ocean by his mother because he’ll get washed away. These stories teach empathy and fear. This sounds a lot like the children’s story from David’s memory, “The Angriest Boy in the World,” and how David has empathy but he’s afraid.

Speaking of “The Angriest Boy in the World,” Syd can see him throughout the episode after her journey through David’s mind in “Chapter 3.” David could also see Syd when she was in The Eye’s body. This could be due to her switching bodies with him in “Chapter 1.” They share a unique connection.