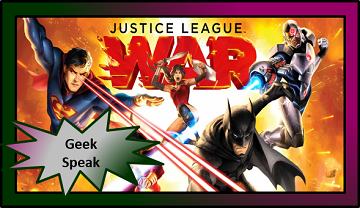 DC’s animated movies are far better than their cinematic universe, but Justice League: War doesn’t live up to the quality of other DC animated films. I liked how most of the Justice League are already doing their super hero thing—we were spared watching Batman’s origin story for the trillionth time—but there isn’t much to like in Justice League: War beyond a good cast, who were miscast for the most part.

These versions of Superman, Batman, Wonder Woman and the rest come from DC’s the New 52, and Justice League: War gets its story from Geoff Johns’ Justice League: Origin. I guess “war” sounds tougher than “origin.” Too bad they didn’t change the story to go along with the name change; this is not one of Johns’ better stories. The plot is thinner than vaper.

There may be spoilers so consider yourself warned.

DC Comics’ favorite—and over-used—villain Darkseid invades Earth because he wants to invade Earth. If you want a more complex reason for his invasion, you’ll have to invent one yourself because it’s not there. Justice League: War transforms Darkseid from the intelligent, conniving overlord he is to a mind-less brute, and the Justice League tasked to defeat him are snot-nosed, unlikeable variants of the characters fans have grown to love.

This Superman doesn’t fight for truth and justice; he wants to break stuff and smack people. This Wonder Woman is a dumb, petulant child who’d rather hack and slash through her enemies, instead of the Wonder Woman who’d learn from them. Plus, the scene where Wonder Woman freaks out over tasting ice cream for the first time wasn’t fun, cute, or funny; it was painful. This Green Lantern continues DC’s cinematic trend of copycatting Marvel’s Iron Man, but his sarcasm comes off as mean and stupid instead of smart and cocky. Shazam, the hero who was formerly known as Captain Marvel, and his alter ego Billy Batson is a strange case. Billy Batson is a brat who calls his foster family stupid, even though it’s clear they care for him, but Shazam (voiced by Sean Astin) manages to eke out some likability; I’m putting that on Astin’s voice acting instead of the writing. The remaining three Justice Leaguers fair better but they’re far from perfect.

The Flash was serviceable but forgettable. Cyborg was done well enough, but his origin story was squeezed into the half-baked invasion plot. Jason O’Mara did an okay job with Batman—an animated Batman sounds odd when he’s not voiced by Kevin Conroy—but Batman was portrayed as a video game player who set their game on very easy or cupcake, had infinite ammo, and could do no wrong.

As for the rest of the voice acting, Alan Tudyk’s voice couldn’t pull off this Superman design—Supes was too bulky. Michelle Monaghan doesn’t sound like the Wonder Woman who just came from Themyscira; she sounded more like Lois Lane. And Justin Kirk’s high-pitched frat boy could fit Guy Gardner, but doesn’t come close to Hal Jordan’s Green Lantern. I like a lot of these actors, but I kept wondering if this cast had done another DC animated film, and they stayed in the recording studio for Justice League: War.

Getting back to the story—or lack thereof—the misrepresentation of these iconic characters wasn’t the only thing against the script. The writers decided to age up the story by including casual swearing. I’m okay with casual swearing—hell, I add in some swears for good measure from time to time—but adding in “whore,” “douche bag,” and the like to a script is a teenager’s or pre-teen’s idea of making something more “grown-up.”

Give us complex characters. Even the bit characters like the guy protesting Wonder Woman could’ve used more development. He could cross-dress as Wonder Woman in private (Wonder Woman finds out about this when she uses her Lasso of Truth on him), but that shouldn’t be the reason why he’s protesting her. Could he be afraid of someone with too much power and he wants to emulate her? Throwing in a reference to cross-dressing without using it as pretext to why you’re doing what you’re doing (Wonder Woman did use the Lasso of Truth, not the Lasso of Half-truth) or adding context is just another way to pander to the audience and add artificial shock value. Give us more complex characters like the characters in this film, only how they’ve been portrayed in the comics not named Justice League: Origin. And don’t make Darkseid an intergalactic Solomon Grundy.

I can see why Jim skipped this one. You should too. Thanks for reading.