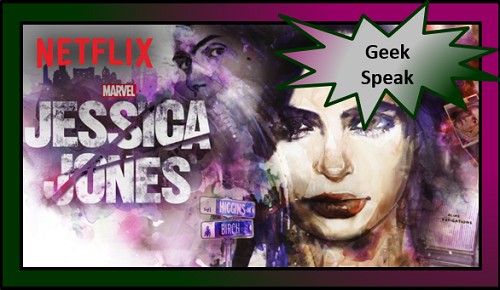 With movies like Guardians of the Galaxy and Ant Man, Marvel has shown it can flex its muscles with even its little known characters. The first season of Jessica Jones does perhaps even more to prove that point, even if perhaps not quite as successfully as some may have hoped.

One tool Marvel has used to sell some of its lower profile characters is humor. Of course, much of their fan-base has been critical of that tactic, but I don’t think there’s much room to question that it’s made certain projects more appealing to broader audiences. There’s some humor in Jessica Jones. It’s mostly sarcasm intended to show Jessica’s acerbic personality, though, and the show really doesn’t lean on it to entertain the audience. It comes through again when certain cast members are meant to portray caricatures of archetypal nosy or sanctimonious neighbors, but even here, it doesn’t seem to be trying for laugh-out-loud moments.

As I noted in my first impressions of episode one, the show leaned heavily on hard-boiled detective clichés, and while that became less of an issue as the season progressed, it never really went away. It seemed whenever the plot needed it, Jessica could pull a classic move like pickpocketing or planting a GPS on some unsuspecting baddie.

On the subject of Jessica’s powers, I’m glad the show didn’t feel the need to weigh itself down devoting much screen time to her origin story. We get it in flashbacks as so many shows are wont to do these days, but it’s a much more efficient way to move forward. On the other side of that, I couldn’t help but furrow a brow at some of the inconsistency in her powers. As Kyle and I have both made clear, any time you deal with comics and superheroes, you have to be willing to suspend disbelief, and that’s fine, but Jessica often seemed too breakable to me. Common sense tells us that a woman who can jump ridiculously high in the air and come down uninjured must have a heightened level of durability, but we see her cut and bruised so often that I found myself forgetting that. I think she was shown as more vulnerable to add tension, and to avoid giving her too much overlap with Luke Cage, but it wasn’t until the show was in the home-stretch that Jessica reminded us that she heals faster than most, and by that time, it came off as a detail forced into the story.

Kilgrave worked well as the main villain of season one. Tennant’s performance was solid, a good mix of creepy, horrifying, and charismatic, but without giving spoilers, I wanted his undoing (that’s not a spoiler. Did you really think he was going to win?) to be a little more than it was.

Ritter did well as Jessica Jones. The snarky, disaffected personality is something we’ve seen her play before, but when we see her portray the fear and trauma Jones carries, I think Ritter gets a chance to show her chops.

All things considered, I don’t think Jessica Jones was as well done as Daredevil, but Marvel set out to expand their universe, capitalize on some of their lesser known names, and give a female hero a leading role, and they succeeded with all of that. I don’t know that I would feel compelled to rewatch season one, but season one was absolutely good enough to buy my interest in season two.