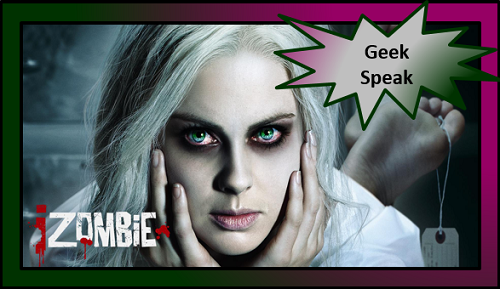 “Max Wager” was an excellent episode of iZombie. The show has a way of building up to one thing while giving us a payoff for another story thread. And there was a moment in this week’s episode that made you feel sorry for Blaine. Yes, Blaine the bastard from season one. I won’t spoil it here, but there’s a heartbreaking and disturbing scene involving Blaine and it’s a doozy.

Getting back to how iZombie builds on itself, “Max Wager” took last week’s murder mystery and the brain affecting Liv and built on both elements. A gambling lawyer, who inadvertently got last week’s victim the basketball coach killed) gets gunned down. Now, Liv was on said basketball coach’s brains last week and breathed b-ball as a result—she even gave a hilarious and spot-on halftime pep talk to Major—and now she’s on the brains of someone who betted on basketball games. Characters make connections to the previous week, we see Clive geek out over meeting ex-Laker Rick Fox, and sinister human element gets added to the zombie underground.

And it’s the sinister human element that makes “Max Wager” shine. Liv’s BFF Peyton is investigating Stacey Boss. We hear about the crime boss for a while and even hear his voice throughout the episode. Since Liv is on gambler brains, she makes bets during the episode and one of the other characters at the barber shop in which she makes her bets has his face obscured and we know it’s Boss. I don’t know why Stacey Boss gets his haircut every day Liv drops by the barber shop, but he’s there for disturbing commentary on Liv’s case. By the time he shows his full face to Liv, Boss had just shared the most disturbing “perfect murder” scenario, just for kicks. Later, when he pays Peyton a visit, he reveals who he is in an equally unnerving way. We haven’t seen the last of Stacey Boss and that’s a great thing.

Blaine also gets some much needed face time. His father blackmails him into committing a despicable act. Again, I won’t spoil it here, but you can see how Blaine got to where he is now honestly. Blaine even laments not being a zombie anymore and that moment was believable as well.

For being a show with a humorous spin on zombies, iZombie knows how to terrorize and haunt an audience. They just do it in the most unconventional way.