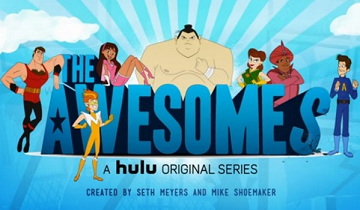 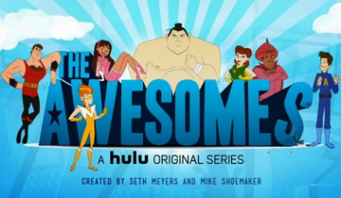 It’s summer, and it feels grand. Did I say grand? I meant it feels so awesome. Even though there aren’t that many television shows on the air at the moment, there’s one Hulu exclusive show that tweaks the geek meter until fall: The Awesomes.

The titular misfit team, voiced predominantly by former and current SNL members, has a list of delicious psychological issues so long you could dedicate an epic poem to them. Better start rhyming now. Or not.

While the first season focused on introducing the heroes, assembling the team, and stopping a large threat, the second season hasn’t been as focused, meandering from the introduction of one villain to another with a loose storyline of a promised super villain team at season’s end. Still, the Awesomes remains endearing.

We learn more about the depth of the heroes’ problems in the second season (most notably Impresario in the “Made Man” episode), and the villains are interesting, even if some of them are footnotes in the episodes in which they appear. But despite the fact that the latest episode, “Secret Santa,” introduces yet another villain, the Fake Santa Claus, this villain is anything but a footnote. How could a fake Santa Claus take a backseat during an ubiquitous holiday panning episode let alone The Fake Santa Claus?

The Fake Santa Claus possesses mind control over animals and people, so he can convince people that he’s the real Santa Claus. This is an okay premise, but in classic Awesomes fashion the real story rests in the heroes’ insecurities. Both the leader Prock and the team’s estranged member Hotwire deal with family issues around the holidays.

The Awesomes is ramping up toward its season finale with the unveiling of the P.R.I.C.K.S. (the super villain team they’ve been assembling all season), and the big secret (to the team, not the viewers) that Hotwire is the do-gooder Metal Fella. We’ll see if the payoff is worth the journey.