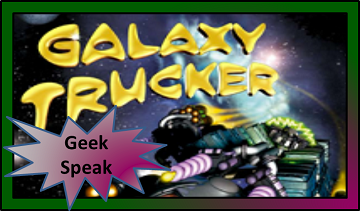 Game flow:
Galaxy Trucker is split into three rounds. So, if you want to abbreviate the duration of the game, you can play one or two rounds instead of the full three. During each round, you build a space craft out of space junk. You’re on a mission to pick up and deliver the most cargo while warding off pirates, navigating asteroid fields, and traveling the most distance. 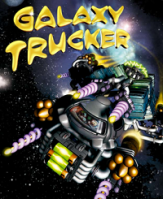 Each round, in turn, is split into two very different phases: building and traveling. The building phase of a round has each player race in real-time to build the best junker spaceship out of the available pile of components that are placed face down and shuffled. Once the first person finishes their ship, they take the first player token (you get a head start on the track) and flip over the timer. The remaining players only have until the timer runs out to finish their ships. 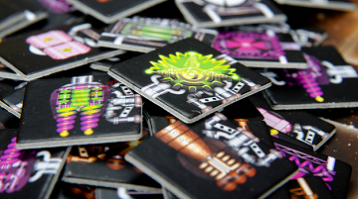 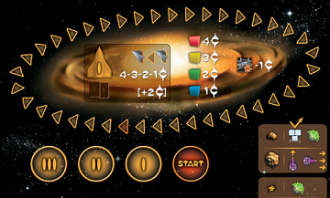 The travel phase diverges from the first by a large measure. Players pull from a deck of cards (the galaxy deck) that represent the galaxy you’re traversing. You deal with any obstacle—if this is any—or if you come across a planet, you can pick up cargo to score points. The galaxy deck isn’t too big, and once you play the last card of the deck, you finish the round. Then, you tally up your points and go to the next round. 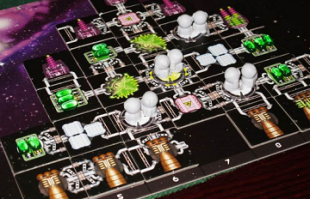 Review:
Galaxy Trucker isn’t forgiving for new players. If this is your first time playing the game, you should play the first round by itself so you get the hang of the game. If you’re playing with someone who’s playing for the first time, be kind and play a test round.

I didn’t mention this in the game flow, but there is one very important strategic element to this game. While you’re building your ship, you have access to three piles of cards that represent three quarters of the galaxy cards during the next phase. You’re given the option to look at these cards so you’ll have an idea of what to expect during your upcoming journey. The only problem with this is that you’re sacrificing build time for planning. 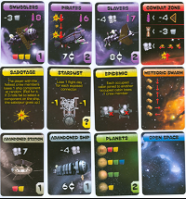 The first time I played Galaxy Trucker I didn’t look at the galaxy cards. I’ve since added this mechanic to my play style, and it’s invaluable. You’d be surprised how the addition of a simple game mechanic like this makes for very good strategy. 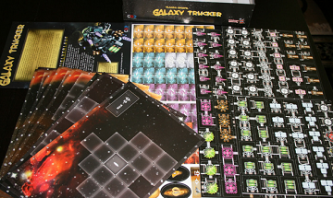 No two games of Galaxy Trucker play the same and this leads to a game that’s infinitely replayable.

Verdict: A fun game that comes off as a simple real-time, building game but has one strategic wrinkle to it that adds replayability and enjoyment.