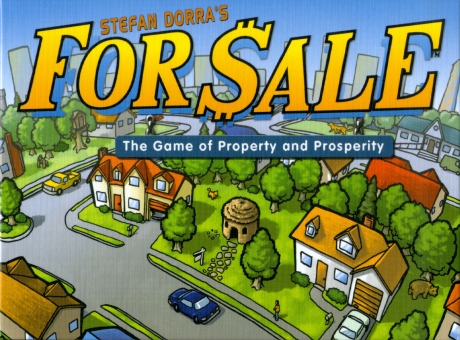 Auctions in games have faded in recent years but there are some neo-classics that used the mechanism. For Sale is such a game. Players take on the role of real estate moguls, trying to buy properties and sell them for profit. For Sale hit the market before the “Flip this house/business” craze and might be the kind of game “flipping” property fans could enjoy.

We’ve got two unique game phases to cover but before we do, let’s go over some technical jargon.

For Sale has three types of resources: coins, properties, and checks. In the first game phase, players use coins to obtain properties. When play transitions to the second phase, players sell their properties for checks. The player with the most money (combination of coins and checks) at the end of the second-round wins. 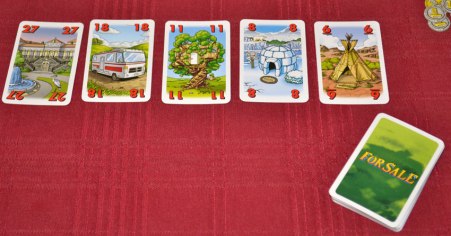 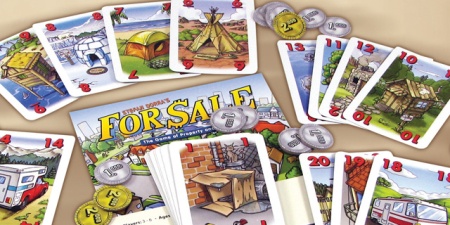 Players choose who goes first. The rules say whoever lives in the biggest house goes first, but you can determine player order some other way.

Then, players take turns bidding on the properties. New bids must be higher than the previous highest bid. Any coins used in the auction process are lost for the game, and players can choose to pass at any time. Once every player but one has passed, whoever had the highest bid wins the right to choose which property they want first with the rest of the players choosing their properties in order, based on the size of their bids.

Once all the properties in the deck are depleted, play transitions to the second phase.

The second phase is like the first. Players set their leftover coins aside, they won’t be needed. Each player should have a hand of property cards.

These property cards will be used to obtain check cards. Check cards are valued from $0-$15,000. 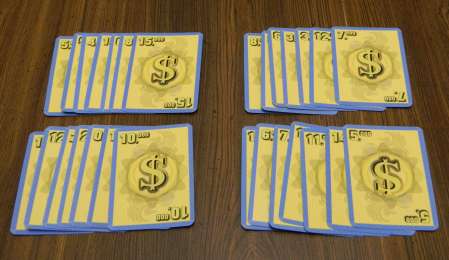 After the deck of checks is shuffled, checks equal to the number of players are dealt face up. Players now take turns blind bidding on the checks. Each player chooses the property they want to use for the bidding round and places it face down on the table. Once every player has chosen a property, the cards are revealed. The player with the highest value chooses which check they want first with the rest of the players choosing the remaining check in descending order of property value.

Once all the checks in the deck are depleted, players add up the value of their checks and coins and whoever has the most money wins.

I’ve heard great things about For Sale for years. Several critics have heralded it as the greatest filler game (short game to fill time in between longer games). Other critics have said it’s the best auction/bidding game of all time. It sounded like hyperbole. But darn if For Sale isn’t one of the best, if not the best, filler or auction game. It’s earned most of its hype.

Relative value is an important, overlooked skill. Many newbies to For Sale will get in a bidding war win they see the big “29” card hit the table, even when the lowest property value is “23.” You could spend no coins and pick up the “23,” so you players don’t earn that much by spending half their coins for a card that’s 6 points higher than the lowest card available. Likewise, the cardboard box “1” isn’t always a bad play. I’ve picked up the cardboard box for zero coins, when the best card available was an 8 or 9. Each card has value.

For Sale has been out since 1997 (20 years since this review) but its contribution to tabletop games can’t be overlooked. Most auction games force new bids to beat old bids, but when For Sale was released, that wasn’t the case. Games prior to For Sale would allow for bidding ties and that slowed down gameplay. For Sale bids last less than a minute. Games with bidding ties had some bids last 5-10 minutes. That doesn’t sound like a lot but with multiple bids, those other games added at least an hour.

Time for me to hit the gaming table, so until we meet again, thanks for reading.