The Man and His Love
On TV and in the comic books, tonight’s villain is known simply as The Man. The only other similarity these two versions of The Man share is their compulsion for marrying child brides and how they get thwarted by John Constantine.

In the comic book, The Man is a magician who wants to marry his niece—so I guess the story could’ve gotten a lot more twisted than it did—and we find out that The Man is part of the Damnation Army, putting John between those fiends and their enemies, the Resurrection Army. If the Resurrection Army sounds familiar, they should. Zed’s father runs the show and coincidentally, the first appearance of The Man (Hellblazer 4) was also introductory issue for Zed.

4 Delano St.
The story “Waiting for The Man” took place in Hellblazer 4, written by Jamie Delano. Is it any wonder that John finds The Man at 4 Delano Street?

Bad Cop, Evil Cop?
Zed’s right. Jim Corrigan does die and soon, but the real travesty comes when Corrigan gets rejected from heaven because he was too corrupt on Earth. God sends him back to the mortal plane to be his Spirit of Vengeance, known as The Spectre. We know Jim had questionable morals, but the Constantine finale showed him as a cold-blooded murderer, and John put him up to it. Looks like John damned another soul.

A Major Supporter
William Shatner has supported Constantine’s renewal for quite some time, and he took time to make the above picture, showing fans how closely Constantine has followed the source material. I’m not sure if I agree, but I like Mr. Shatner’s devotion. 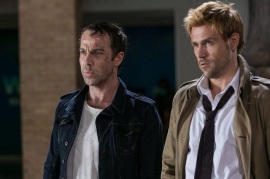 Gary the Ghost
Constantine showed us Gary Lester’s death a few episodes ago, and it played out in the show much like it did in the comics, but we saw in this week’s episode that Gary may be dead but he’s not gone. He inhabited a corpse’s body to warn John of a bounty on John’s head. This happens a lot in the comic, and it was nice to see it here.

Major Spoiler…The Source of The Rising Evil
It was Manny the Angel of Exposition all along. Angels have had dubious roles in the Hellblazer comic, always one step away from becoming fallen, and Manny’s interest in John felt odd. Tie that with the fact that Manny never looked like he wanted to save John’s soul, and you get the show’s secret evil mastermind.

Want to check out our Constantine review? Click on this link.