AmerTek was mentioned in this week’s Arrow, but if you remember the promo poster for The Flash, there were tons of logos on billboards and posters, dotting Central City. One of the logos was AmerTek.

AmerTek Industries was a leading weapons manufacturer, tech conglomerate, and defense contractor. They were best known for their biggest gun, the “Toastmaster” BG-80. After finding out how much destruction his invention caused, the engineer behind the “Toastmaster” went into hiding and took the name John Henry Irons.

Eventually, Irons’ guns would find their way into the hands of Metropolis and Washington DC street gangs, which also coincided with the death of Irons’ idol Superman. Irons would transform himself into the armored superhero Steel. 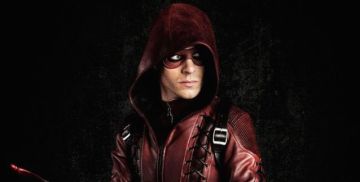 Roy returned after a very rough season three. Here’s a quick refresher. Roy was Arrow’s first in-costume sidekick Arsenal before he gave up his freedom to buy Oliver’s. He faked his own death in order to sneak out of jail and find a life for himself.

In the comics, before Roy became Arsenal (and later Red Arrow), he was Speedy, which is the name given to Thea in the TV show.

Arrow name-dropped another big DC Universe scientific conglomerate, but the show turned it into a tech company, while the comics version of Cadmus is known for its genetics work. Cadmus Tech is a nod to Project Cadmus, a scientific research center just outside Metropolis best known for cloning.

Cadmus cloned Guardian and the Newsboy Legion, so they could have extended heroic careers beyond the Golden Age, in the post-Crisis DC Universe. They’re also responsible for the cloning of Dubbilex the DNAlien and the post-Crisis Superboy.

The photo above is from the set of The Flash. They’ve had a Cadmus Labs prop for the entire show’s run but it’s never seen on camera in a way that viewers can recognize it.

Pennytown is a new borough of Star City and home to Damien Darhk and Ruve Adams. It first appeared in Green Arrow #42 (August 2015), where it’s described as a neighborhood in Seattle, and during Arrow’s midseason premier in which Green Arrow rescues Darhk’s family.

We learned that Roy had been hanging out in Hub City since last we saw him. Hub City is the birthplace and home of Vic Sage, The Question.

The Calculator, Noah Kuttler, is another borrowed Batman villain and he’s also an anti-Oracle. If you don’t recognize the name, that’s alright. He wasn’t a memorable villain and literally dressed up like a giant calculator for most of his criminal career. Thankfully, he’s ditched the RadioShack chic look and is now the supervillain you call if you need intel, men, or supplies.

His shtick was that he would record an opponent’s combat maneuvers so that he couldn’t be beaten the same way twice. That same gimmick has been used by a villain on Supergirl and the JLA villain Prometheus. Incidentally, Prometheus was the one who killed Roy Harper and then got himself killed by Green Arrow.

Kuttler was the one who hooked up The Atom’s ex-wife with Captain Boomerang, whom she hired to kill Jack Drake, Robin’s father. After Identity Crisis, Kuttler became the arch-nemesis to the wheelchair-using, IT genius Oracle. Could there be any more parallels between Overwatch and Oracle? I guess Barbara Gordon’s dad is a much better guy than Felicity’s.

Did you miss our Arrow “Unchained” review? Here’s a link. Thanks for reading.