Lazarus Pit
We finally caught a glimpse of one of Ra’s Al Ghul’s Lazarus Pits, the chemical baths that keeps him alive, but perhaps not. This week’s Arrow didn’t mention the pits, but it did show Ra’s chilling in a hot spring and that’s essentially what the Lazarus Pits are. Ra’s could manscape by other means. I’m not sure if Arrow can mention the pits without inadvertently breaking their no Batman code. We’ll have to see, but the above image is definitely a tip of the hat to the Lazarus Pits.

Daddy Knows Best
Ra’s controls who his daughters date. Nyssa insists that he didn’t approve of Sarah and that might be true, but Ra’s has tried for years to hitch one of his other daughters, Talia, to Batman. 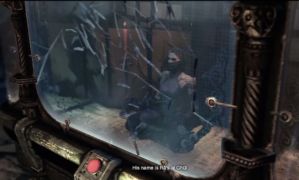 Meditation
This might be nothing at all, but this week’s episode of Arrow showed Nyssa Al’ Ghul in the Arrow Cave jail meditating, and she looks similar to the League of Assassin’s member you first meet in Batman: Arkham City.

The Atom
Finally, we saw Ray Palmer in full Atom gear. While it was a joy to watch him streak across the screen, it didn’t feel like Ray’s story was a part of the episode. Still, he looked great and can’t wait to see him in a Flash crossover in the coming weeks—which incidentally, adds to my confusion as to how he factors into Arrow’s storyline.

A Replacement for Ra’s
Ra’s wants Ollie to follow in his footsteps and replace him as the head of the League of Assassins. If you read the comic, you know that Ra’s does this a lot. He wanted Batman to marry Talia—unleashing assassin babies on the world—and take up the mantle of Demon’s Head and we’ve even seen Bane get a similar offer. But how far has Ra’s scraped the bottom of the barrel if he’s going from Batman (a DC Comics icon) to Green Arrow (a tertiary member of the Justice League)?

It’s one thing to not mention Batman. It’s another to tell a Batman story with the Green Arrow in Bruce’s shoes.

Head back to our Arrow review here.