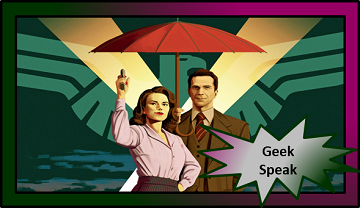 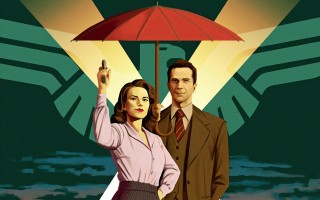 Hollywood has provided a new space for Agent Carter to explore, Howard Stark gives the show levity, and there are more nods to history—both Marvel and actual—than Meryl Strep has Oscar noms, but I’m worried the show doesn’t know where it’s going. Agent Carter’s second season will only last ten episodes, so we’re a third of the way through the season already, and it aims to link into Marvel’s Agents of S.H.I.E.L.D.’s third season, which returns in early March, and the upcoming Doctor Strange film.

Agent Carter’s trying to do too much in a small time period, and I wonder when we’ll reach comic book film/TV show critical mass. I love that so many comic book TV shows and movies exist, but the cast of characters gets bigger and bigger and that causes the storylines to become unruly. Agent Carter may be the victim of such an unruly storyline. And that’s a shame because Agent Carter is improving in other areas. Not the least of which is the historical references.

Kid Colt, a Marvel Comics Western series that ran for over 30 years, made an appearance, and that was fun. Plenty of the physical comics made their way on the screen but when we first meet Howard Stark, he’s directing a Kid Colt movie. This, in turn, led to a not so subtle dialogue exchange between Howard and Peggy, opining that America isn’t ready for a female cowboy. Does that sound like modern critical responses to Marvel’s lack of leading ladies? Yeah. Agent Carter lacks subtly, but when it doesn’t preach to us about equal rights, it can be fun.

This week’s ubiquitous female rights announcement came in the form of Howard crashing a gentleman’s club with a throng of women in tow (Peggy slips behind the scenes to conduct a little sleuthing) and when the club’s president calls for security, he orders a Code Pink. Again, this isn’t subtle but it’s fun and in keeping with the characters. Where I get tripped up in this instance is in calling the situation a “Code Pink.” The year is 1947, just after World War II, and that’s when the shift from pink as a boy’s color to pink as a girl’s color started. It takes a little suspension of disbelief to think that this color shift had taken hold of the country.

(Note: no one knows for sure how or why the gender color shift occurred but one of the most popular reasons is that Rosie the Riveter wore blue overalls and when the men returned from war, the women were told to take off their blue overalls and put on pink dresses; the feminist movement embraced pink as their protest color after that. This places the “pink is a girl’s color” movement in the timeframe of 1947-50, so Agent Carter is stretching believability.)

Howard Stark is the fictional counterpart to Howard Hughes—I wonder how long it will be before Howard Stark becomes Tony’s grandfather instead of father—and now Agent Carter gave us a fictional version of Hedy Lamarr, the actress who invented a radio guidance system that also paved the way for modern wireless technology. Both Stark and Frost, Lamarr’s fictional doppelganger, flip their real-world equivalent’s careers. Hughes was a director turned inventor, while Stark was an inventor turned director here. Lamarr started as an actress and turned inventor, and Whitney Frost started out as an inventor and turned into an actress. I liked how Agent Carter incorporated history into this season.

The story’s a word jumble at this point. The gentlemen’s club Howard, Peggy, and company infiltrate rigs elections and pulls other strings (could be Hydra-influenced), zero matter has to be a callback to the monolith in Agents of S.H.I.E.L.D., and Dr. Wilkes’s transformation to the ethereal doesn’t harken social commentary about race, unless Agent Carter is deploying a softer approach. I doubt that. Agent Carter’s fun but I don’t know if they’ll pull out a full story in seven episodes or less, especially if they intend to tie the show into every other Marvel property that sees a release this year.