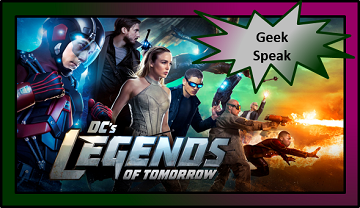 Kyle and I talk quite a bit about suspending disbelief when it comes to shows like these. Legends of Tomorrow asks quite a bit of that. As long as it entertains me, I’m willing to play along. I won’t ask why they don’t just hop in their time machine and go back to the moment where Malcolm scooped Vandal Savage ooze up off the ground and stop him. I’ll just enjoy the adventures. I won’t ask what the problem is if they fail a mission when they can just go back in time and try again. I’ll just buy into the moment and roll with it. I can do that, but when the show takes it upon itself to point out its own foibles, it gets hard to keep with it. Specifically, I’m referring to Roy’s moment where he pointed out that their elaborate Ocean’s Eleven-style heist at the Pentagon was unnecessary. He could have just shrunk down in the ATOM suit and infiltrated alone. It’s hard enough not nitpicking these things, but when they point it out, it becomes impossible.

This episode suffered from what happens with a lot of team-up stories, be it in Arrow/Flash crossovers or comics themselves. By that I mean that there’s just never enough to do to go around. Legends‘ answer to that has been for characters to “hang back,” and this week that meant these forced character moments between Canary and Hawkgirl, or Professor Stein (though that ended up being put into the plot). What bothered me with the Canary/Hawkgirl bit was the mention of Sarah’s bloodlust, because, well, she shouldn’t have any. She was “cured” of the effects of the Lazarus Pit by Constantine, and maybe I could overlook that, but that very point was just raised on last night’s Arrow. An inconsistency like that makes it look like the left hand doesn’t know what the right is doing. These shows air a day apart on the same network.

The idea that Savage is trying to build the ultimate cold war weapon, and that it’s Commie Firestorm seemed odd. On the one hand, this show acknowledges these characters as the “castoffs” of their time, but now one of them is the ultimate weapon? It’s more than likely that I’m missing something, but that’s really just because this show is too inconsistent to hold my attention. Some of these are neat characters, and I hope the show gets its feet under itself, but for the time being, it’s like Doctor Who with way too many companions.