There weren’t too many secrets in this week’s Arrow, Flash took most of them, but there were a few.

Sins of the Father

This week’s title is a common one and a common theme. There were plenty of DC stories that used this title and here are a few.

The first story arc of James Robinson’s 1990s Starman was title “Sins of the Father.”

Batman the Animated Series had an episode that used this title. The episode in question featured Two-Face as the villain and it also marked the first appearance of Robin.

Man, the 90s loved “Sins of the Father” because an episode of the original Flash TV series used the title.

We’ve seen the T-sphere show up more often than the man who made it famous. While it is a communications device, as mentioned in this week’s episode, it does so much more. We may not have to wait too long for the T-Sphere’s creator Mr. Terrific.

Arrow and Flash love to honor comic creators with their own street corners and 7th & Rucka is no different. Greg Rucka is a longtime Batman writer. If you’re wondering why a Batman writer would get a mention on Arrow, you’d be happy to know that Rucka co-created Nyssa. 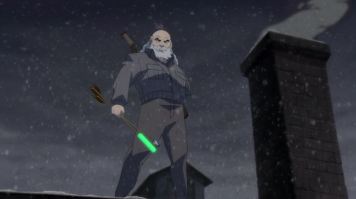 The Green Arrow comic features a lot of severed arms. Ollie will even sport one soon on Legends of Tomorrow.

Since Malcolm is an older, darker reflection of Ollie, these turn of events could be a nod to The Dark Knight Returns (pictured above), where an older, darker Oliver has the same thing happen.

Did you miss our Arrow “Sins of the Father” review? Here’s a link. Thanks for reading.