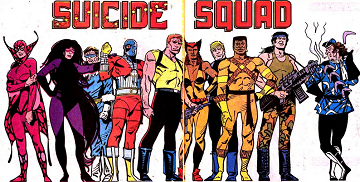 The Suicide Squad is a group of captured DC Comics super villains who are implanted with an explosive device in their spinal cord and forced to go on “suicide” missions that no one in their right mind would tackle. Recently, Warner Brothers and DC Comics have announced who they have tapped to play these polarizing characters in the upcoming blockbuster. JK Casting Couch will give you the skinny on these roles and who’s playing them. 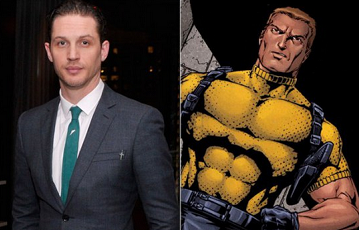 Tom Hardy as Rick Flag
Often considered to be the shining knight to Deadshot’s shadow, Rick Flag is the reluctant leader of the Suicide Squad. Just don’t tell Flag I said he was anything like Deadshot. Flag’s the only member of the Squad that’s not a straight-up criminal and resents having to lead a team of ne’er-do-wells.

Oddly enough, when the actors were announced and before the roles were confirmed, many people believed Will Smith (who ended up cast as Deadshot) would play Rick Flag, while Hardy would play Deadshot. Hardy (Bane in Dark Knight Rises) comes off as a grizzled killer, so I could see him as Deadshot. But I don’t like it when folks typecast actors. It’ll be nice to see Hardy take on the less obvious choice.

Will Smith as Deadshot
Deadshot is a hired assassin who claims he never misses. A consummate professional, Deadshot continued with one hit even though Batman threatened him and his family. Of course the Dark Knight was bluffing, but Batman did cause Deadshot to abort his mission by freezing his client’s bank account.

As mentioned above Will Smith wasn’t most people’s choice as Deadshot. Smith has more of a squeaky clean image than Hardy has a tough guy image. I love that Smith gets to try his hand as a nasty piece of work, but I wish they would’ve considered using Michael Rowe from Arrow. Is there some kind of rule that the DC Comics TV and movie universes can’t mix? And I hope they don’t make Smith wear the helmet or at least not the full Deadshot helmet. It’d be a shame to hide that face under silver.

Jai Courtney as Boomerang
Dropping the Captain from his name, Boomerang is the illegitimate son of an American soldier and an Australian woman. He gained an affinity for the uniquely Australian tool. He first worked as circus performer and then began his life of crime as primarily a Flash villain.

Jai Courtney’s casting as Boomerang is a touch of good news and not-so-good news. We’ll start with the not-so-good news. Courtney doesn’t portray Captain Boomerang in the Arrow TV show, so the same question of cross-pollination between DC Comics TV and movie universes applies. But unlike Nick Tarabay, who does play Boomerang on the small screen, Courtney is Australian, so that’s good news. Since boomerangs are so engrained in Australian culture, it’s silly not to cast an Aussie. It’s kind of like casting a muscular German – instead of a pudgy American – to play Sergeant Whopper.

Cara Delevingne as Enchantress
Things get weird when a freelance artist June Moone attends a costume party at a creepy castle. In short, a magical being gives her the power to fight an evil force in the castle. All Moone has to do is say the words “The Enchantress” and she transforms into the mystical booty kicker of the same name. She’s able to stop the malevolent presence, but she suffers from a nasty duality. Moone is a kind-hearted lady. The Enchantress would spit on Superman’s cape.

Cara Delevingne is the most junior member of the cast—in terms of acting experience. She’s mostly known for modeling but she did have a large role in 2012’s Anna Karenina. So she has some experience playing a period piece character. Still, Enchantress may be the most nuanced character on the Suicide Squad. It’s a tall order, but I can’t wait to see her tackle this role.

Margot Robbie as Harley Quinn
Dr. Harleen Quinzel was the Joker’s mental therapist, but it didn’t take long for the clown prince of crime to warp her to his way of thinking. Let’s face it. The Joker’s life has a lot more laughs. Quinn may have made her debut on Batman: The Animated Series, but she’s been in more than a few comic books including The Suicide Squad. The Suicide Squad movie will be the first time Quinn will receive the live-action treatment—to much fanfare.

Margot Robbie sure does look the part of Harley Quinn. She received raves from her star turn in The Wolf of Wall Street as Naomi Lapaglia, so she has the acting chops to hang with Leo DiCaprio. It’ll be fun to see Robbie transform her sultry voice to Quinn’s high-pitched nasal. If things don’t work out with Robbie’s voice, perhaps Alex Borstein could provide a voiceover.

Jared Leto as The Joker
Perhaps the one character on the couch that doesn’t need an introduction, The Joker is The Batman’s preeminent villain. He’s the clown prince of crime and Harley Quinn’s Puddin’.

Jared Leto is on the short list of actors who could pull off The Joker as the guy who played The Joker after Heath Ledger. But seriously, Leto following Ledger as The Joker could be tougher than George Lazenby following Sean Connery as James Bond. Ledger as The Joker earned the first Academy Award in Acting for a comic book movie and Ledger’s Joker remains the only comic book movie role to date to have earned an Academy Award.

This role is a monumental task, but we knew The Joker would find his way back on-screen eventually. Leto has earned his own Academy Award for Best Supporting Actor in 2014 (Dallas Buyers Club), so I’m not against Leto’s casting. I question The Joker’s inclusion in the Suicide Squad movie. From what I’ve heard of the script, The Joker runs amok, and the Suicide Squad gets tasked to bring him in. The Suicide Squad doesn’t need a marquee villain. They’re their own antagonists, and we’ll see plenty of in-fighting. I’m sure Leto will give a fine performance, but I hope there’s more meat on this bone.