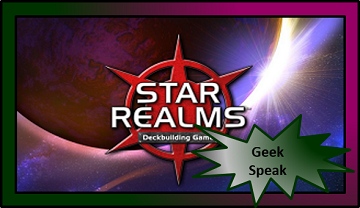 Conquer the galaxy by using a combination of four unique alien factions with this blood-pumping amalgam of Magic: The Gathering’s combat and a deck builder. Designed by Magic Tour Champions Darwin Kastle and Robert Dougherty, this card game zips through the Kessel Run in twenty minutes or less—or your money back. Okay, that last part was from me, not the publishers of Star Realms. To the best of my knowledge, they don’t endorse the money back guarantee.

We’ll warp back to the foreign galaxy in a moment, but first, we have to go through the ubiquitous tech jargon. 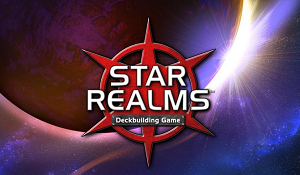 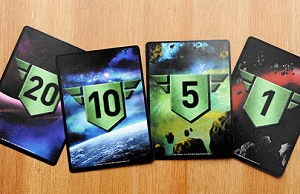 Authority Cards: cards used to keep track of your authority, or health

On your turn, you play all the cards in your hand—there’s no cost to play—and cards grant one of four things: combat, coin, healing, or special effects. And these cards come in two flavors: ships and bases. Ships do most of your attacking. Bases offer special bonuses and some can be used as walls for your opponent to knock down before you can attack them.

You can do all the things on your cards during your turn, so feel free to deal damage, buy new cards to improve your deck, and heal yourself. Whenever you run out of cards in your deck, shuffle your discard to make a new deck.

Unlike every other deck building game, the communal offering of cards that you can buy changes throughout the game. You only have five available face-up cards, while the rest comprise a draw deck. As soon as one of the five face-up cards are bought and added to a player’s discard pile, a new card takes the old card’s place in the trade offering.

Review:
Two things make Star Realms stand out from all other deck-builders: a variable trade offering and direct combat.

Most deck-builders shy away from players dealing direct damage to each other and this leads to indirect interaction which equates to slower gameplay. There’s nothing slow about Star Realms. Fifty sounds like a lot of hurting you have to deal to your opponents, but my son has dealt me thirty plus damage on a single turn. He had the biggest grin when he saw his ships chain into that much damage. I only put twenty minutes as the game’s play time because there are multiple ways to play—and some of the game variations take longer. 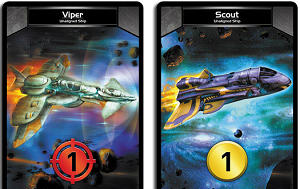 And it’s no small thing that Star Realms has you change the cards available for purchase. This small tweak to the traditional deck-builder results in no two games playing the same.

The factions have great balance while coming off as four distinct alien races. The Trade Federation (blue) earns you more money and does the most to heal you. The Robots (red) are efficient and allow you to get rid of the chaff in your discard pile, making your deck run faster. The Royal Family (yellow) collects taxes from the smaller races by making your opponents discard cards. And The Blobs (green) build off each other to great effect, but their favorite trick is to mess with the trade offering. 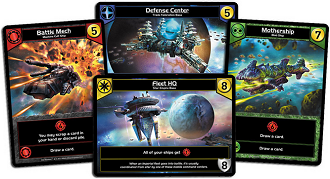 Representative cards for each faction

Still not convinced? Try the game for yourself. There’s a free Star Realms app for most digital devices and you can download it here. http://www.starrealms.com/digital-game. I enjoy the digital version almost as much as the physical one because the computer tallies all your bonuses for you, so the play time gets cut to five minutes or less. I don’t know how many times I’ve played ten to twelve games in a row. 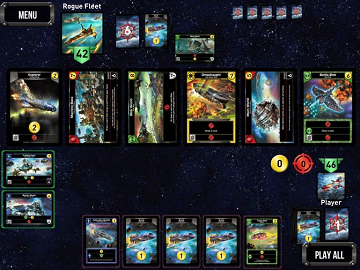 Verdict: A true gateway deck building game with great balance, a fast play time, and enough variety to keep you engaged for a long time. And at fifteen bucks, Star Realms is a lot of game for little dough.