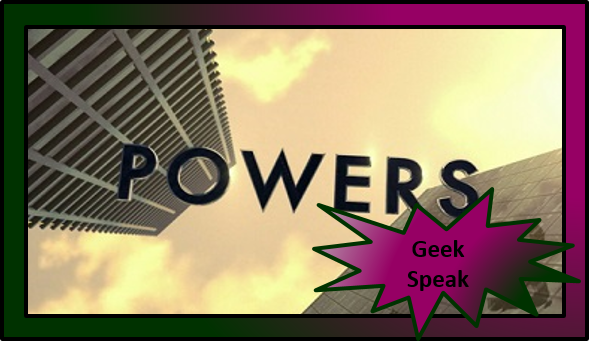 We’re a little late publishing our Geekly TV for Monday. I’m kicking it in Iowa City, visiting the University of Iowa. Go Hawkeyes! 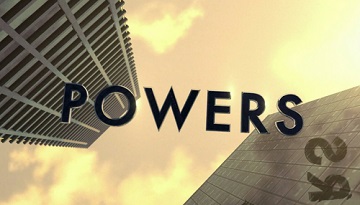 Playstation Network (PSN) launches its original television programming with Powers. I was skeptical of Powers until I found out that its producers are the same as the ones for Breaking Bad. They also assembled an excellent cast: Sharlto Copley (District 9), Eddie Izzard (Hannibal and United States of Tara), Noah Taylor (Game of Thrones and Peaky Blinder), and Michelle Forbes (True Blood and Orphan Black) to name a few. And then there’s the fact that Playstation is owned by Sony and if any of the big three game consoles can pull off original television, it’s Playstation.

PSN released the first three episodes this week, so we’ll give some quick reviews of each one.

The Powers pilot starts off rocky. We get a lot thrown at us at once—that’s code for exposition heavy—but the pilot does a good job setting up the main character, Christian Walker. Walker used to have superpowers and he lost them somehow—we later find out that they were stolen by another character—and he’s since joined the police force’s Powers division, a special task force that monitors humans with superpowers.

I’ll borrow from the Superman (1978) tagline. You’ll believe a man can fly. Only, you believe in the superpowers of Powers half the time and the rest of the time, the powers feel like they belong to another world. The special effects are clunky, but they work for the most part but I take more issue with the overuse of Calista, a wayward teen, as a go-between for these two worlds. Calista loves Powers and wishes she had them but Walker already serves as a conduit between normal people and Powers, so I don’t see the need in Calista as a character.

The Powers pilot suffered from small doses of overacting and the cast didn’t feel connected to their characters and each other at times. I also would’ve preferred more of a noir aesthetic as opposed to an eighties cop show vibe.

The actors eased into their roles in the second episode of Powers, “Like a Power,” and it didn’t hurt that Michelle Forbes joined the cast. She has so much screen presence that some of it can’t help but rub off. My only complaint about Forbes’s Retro-Girl is that she got colored as just Walker’s ex in this episode. That’s a waste for such a talented actor.

Despite that shortcoming, I liked the overall direction of “Like a Power.” Johnny Royalle (Noah Taylor) showed more of his hand in this episode. He single-handedly drove the story. Whether he incited Walker for swiping one of his favorite ties or he manipulated Calista to join him, Royalle had onscreen chemistry with most cast members.

Pilgrim (Susan Heyward) added some spicy hot-headedness this week. I loved how she charged toward a Power named Zerotron, who has electric-based powers, but she didn’t smooth the rough edges with her partner Walker. Unfortunately, these rough edges aren’t partners learning how to work together, these rough edges deal with the lack of chemistry between the two actors. I like both characters, but they can’t get it together. I’m wondering if Calista giving them the slip several times doesn’t contribute to this shortcoming.

And speaking of Calista, I still don’t buy her as the bridge between the haves and the have-nots, especially since “Like a Power” introduced Krispen, who lost loved ones as a result of two Powers fighting. He comes from the source material—fans of the comic should’ve recognized his Kaotic Chic graffiti—and did more to ground the world in the dangers of people with superpowers.

The third episode of the Powers (the oddly named “Mickey Rooney Cries No More”) manages to fix a lot of the series early ailments. Sure, the show still focuses on Calista as a go-between, but we gain a clearer view of what drives this world and its characters. Some folks love Powers, others hate them.

Triphammer, the Batman or Ironman of the Powers universe, made his debut in this episode. He doesn’t have powers and takes a strong anti-Powers stance. He doesn’t hate villains as much as the general idea of superpowers and has devoted his technological prowess to creating a Powers “draining” beam. This arc played well off the reveal of the true effects of Johnny Royalle’s drug.

Up to this point we’ve seen Royalle’s drug kill people but this episode actually saw it enhance a Powers’ ability. Royalle improving works as the perfect counterweight to Triphammer stripping away these same powers, and this duality shows up again between two non-Powers: Calista and Krispen.

I still don’t see the necessity of Calista as a character—she’s only served to show how inept Walker and Pilgrim are at their job—but she does work well with Krispen, the teen boy who lost family because of a fight between two Powers. Calista’s upbringing differed a lot from Krispen’s and these two characters are two sides of the same hero-worshipping coin. I also like how they ran off together at the end of the episode.

But before Krispen and Calista could run off together, we had the continuance of the frustrating tug-of-war between Retro-Girl, Royalle and Walker trying to control Calista. I guess Calista does serve as a good pawn and illustrates the depravity of the three main Powers. All three old friends want Calista for their own selfish reasons. We get a tense stare down between the three at Royalle’s new Here and Gone Club, and fittingly, Calista ends up with none of them, but not before plenty of character development.

I like how they built on Retro-Girl and how she tires from the fame of her Powers. Royalle digs deep in his past to show why he might actually care about Calista. We even saw awkward signs of a relationship between Walker and Pilgrim as they bonded over being losers, but I don’t know if Walker earned his tantrum of not being a good cop; he rushed from lamenting his powers to hating his ineptitude as a lawman. But the cop drama transitioned for the better.

I keep forgetting that Walker and Pilgrim are investigating Olympia’s death because the murder mystery is too much of a side note. I like how Wolfe escapes captivity at the end of this episode. He’s the big, bad Wolfe that can drive the rest of the series. Even so I didn’t care for he absorbed bio-kinetic energy. I thought of Wolfe’s absorption as more of a figurative eating as opposed to the literal eating of people that we saw in the show’s final moments. Ew.

Powers started off rocky—like a lot of other pilots—but found its footing by the third episode. It’s heading in the right direction. Character development without a rush of exposition helps with that. 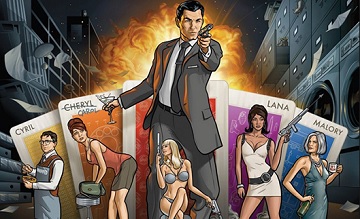 I had to binge watch Archer in order to catch up with its sixth season, so I’ll give you a quick rundown of the show so far. The fifth season—the previous season—of Archer rebooted the series, casting the main characters as members of a drug cartel, but this, the sixth season unrebooted—Is unrebooted a word?—the series and returned the cast to their incompetent, secret agent roots.

This next nugget will be a spoiler for folks who haven’t devoured Archer season five on Netflix or DVD, so avert your eyes if you don’t want to know that Lana’s baby-daddy is Sterling Archer. Okay, that wasn’t much of a spoiler. I thought Archer was the father from the beginning, but I still loved how, during the reveal, baby Archer mimicked her daddy’s hold that thought finger, while she was breastfeeding.

With a baby introduced into the cast, parenthood is the main topic for Archer’s sixth season. Archer has to come to terms that he’s a father and needs to learn how to be a dad even though he never knew his own father. This has led to some extraordinary soul searching from the titular character, and Lana and Archer have rekindled their relationship. Given the context Lana and Sterling getting back together sounds anything but farfetched and yet this is the sixth season, and we’ve never seen them together and it’s a little unsettling—until this week’s episode “Reignition Sequence.”

Katya, Sterling’s ex-girlfriend, challenges Archer’s fidelity, but we see Archer resist her, and not in the pigheaded manner he might have in seasons past, Archer shows his growth by respectfully declining Katya’s advances. All looks well until we find out that Katya left something behind—we won’t say what, but it’s hilarious.

I’m enjoying this season a lot. I thought the previous season Archer Vice took risks few shows that have a strong following wouldn’t take, and this current season continues to take risks. How many animated characters are allowed to grow?

Yet another great episode of Archer and this week’s cliffhanger leaves you thirsty for next week’s episode. Thursday can’t get here quick enough. 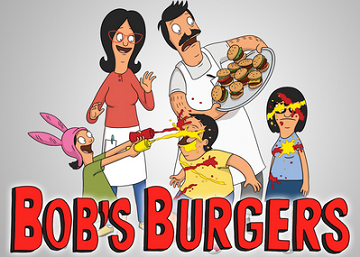 We may have seen the adults and children split up several times on Bob’s Burgers and allusions to eighties movies—like this week’s “Adventures in Chinchilla Sitting”—are par for the course. Even so I enjoyed this week’s episode.

The adults are given license to act poorly. Bob and Linda cheat at trivia night. That’s a bad choice for a date night, Bob, and that’s coming from a guy who enjoys trivia games. The kids don’t fare much better.

Louise babysits her classroom’s chinchilla, and the pet escapes in short order—like we couldn’t see that coming—and that forces the kids out of the house with Wayne, a modern take on the classic Warner Brothers cartoon Abominable Snowman, in tow. Wayne is the chinchilla’s primary caretaker and he complicates the chinchilla problem.

Eventually, the kids recover the pet and in a rare act of kindness, Louise hands over the chinchilla to Wayne, but the level of kindness open for debate. The small pet gets a little too much hugging and squeezing from Wayne.

A good but predictable episode.